We’ve been rather remiss here at Songs from a Surrey Front Room. We’ve been so preoccupied with the actual events, we have totally failed to share anything on here about our last two house gigs. Which is a shame, because they were both really rather special.

On Saturday we hosted our boldest and biggest house gig with raucously entertaining Felix Hagan and the Family, for which a review will follow shortly. Before I post that up, I can’t let our last two shows going without mention. 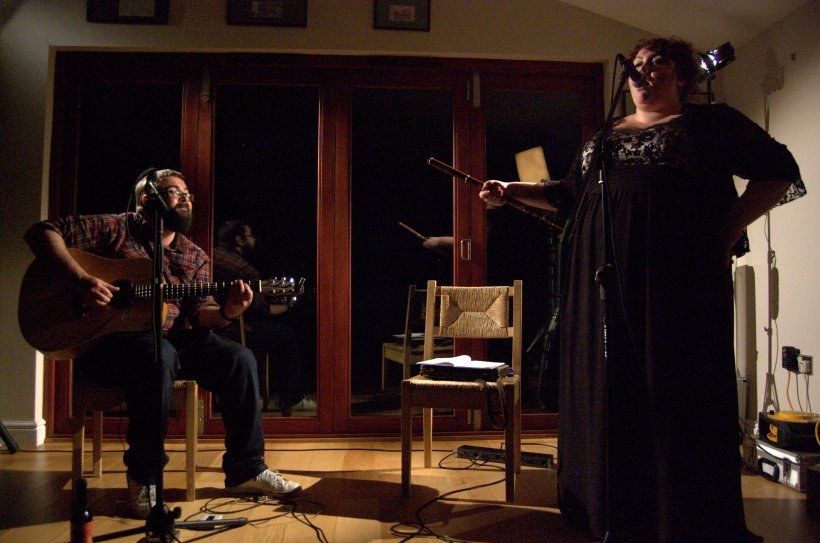 Honeyfeet describe themselves as “Manchester’s finest ethio-trad, folk-hop band”, a description that sums up their eclectic, jazz folk sound far better than I could ever do. I’d been pursuing them to play for us ever since coming across their brilliant single Little Boat on YouTube last year. There were times when I felt I was walking a fine line between persistence and harassment, so I was very grateful when guitarist Ellis Davies finally confirmed they would come.

The logistics of bringing the whole of Honeyfeet from Manchester were too much, so singer Ríoghnach Connolly and Ellis Davies performed as a duo in a stunning set down at Brookside Farm, our now second home.

Ríoghnach has an astounding voice and a wicked sense of humour; she had us spellbound and in stitches in equal measure. Ellis’ expert guitar playing is the perfect backdrop to Ríoghnach’s voice. They delivered a magical evening full of music and laughter, and we can’t wait to invite the whole band back for a future date. 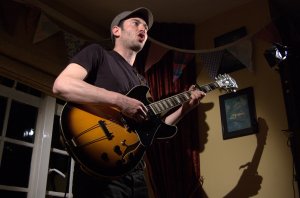 We take a great deal of care over the musicians we book to play in our front room, and it is never an easy decision to book someone you have never seen live. Theo Bard came to my attention after I had put a plea for suggestions out on Twitter, and several people quite independently recommended him. Even so, I was nervous about Theo playing. I needn’t have worried; he is an accomplished songwriter and performer who gave us a truly memorable evening.

His music is folk, but there is nothing twee or backward looking about his songs; sharp rhythms and great narrative lyrics based on his own life experiences make this a contemporary sound. As folk should be.